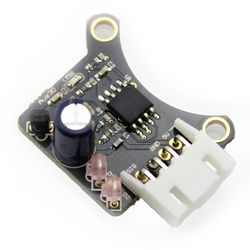 These 3D Printer Z-Probes use modulated infra-red LEDs to accurately detect proximity to the print surface, allowing for automatic bed-levelling while printing.

Compared to mechanical probe solutions - such as a servo and microswitch - these boards have the advantage of requiring no moving components, weighing less, and having a higher degree of repeatability and reliability. Compared to inductive or capacitive probes, these boards are less dependent on the material of the print surface, and will even work on glass. Combined with a high degree of immunity from background IR sources, these boards are ideal for nearly any printer build.

We've designed these boards to couple to a standard 30mm fan - this means they're immediately compatible with all E3D-V6 and Lite6 HotEnds, mounting directly to the fan with no modification or adaptor necessary. Additionally, these boards use the same cable as most mechanical PCB endstops, making swapping your Z endstop out for an IR probe quick and easy.

To mount to a printer without a suitable 30mm fan, all that is required are two screw holes. These should be spaced 24mm apart horizontally, and at a distance of 22mm above the tip of the nozzle. See the attached mechanical drawings for further information.

These probes will trigger at a distance of 3mm from the print surface. Recommended mounting height is that the bottom edge of the PCB be 1-2mm above the tip of the nozzle, and the probe's Z-offset can be tweaked in firmware to achieve the desired bed-levelling results.

These are the HotEnds we've tested with or had reports of success with. If you're interested in trying something different, or if you've tried a different HotEnd with our probe, let us know how it went!

These are the boards we have tested the probe with. It is likely the probe is compatible with other boards as well - if you try a different control board and it works, let us know so we can add it to the list.

The pullup for the Z_MIN endstop needs to be enabled. Uncomment the line:

The endstop should be set to non-inverting:

Adjust the coordinates that define the corners of the probed grid:

Configure the probe offset from the nozzle. The numbers below are approximately correct for a probe mounted to a forward-facing fan on an E3D V6 or Lite6:

When using a probe instead of an endstop, it's a good idea to enable Z_SAFE_HOMING. This moves the probe to the center of the bed before homing:

By default the point that the probe homes at should be the center of the bed - however some versions of Marlin contain a bug where the probe point is miscalculated. To be safe, you can manually define the probe point:

Each IR Z Probe comes with a cable that will connect directly to the endstop pins on these control boards. No modification should be required.

Screw terminals are used to connect bare wires to the X5 for all endstops. The included cable will need the connector removed / cut off, and each wire stripped back to allow connection. In addition, the pull-up resistors on the X5 are not compatible with the IR Z Probe by default. To correct this, a 1.6K resistor can be placed in the screw terminal, between the signal and ground wires. This should allow correct operation of the probe.

After receiving power, the probe takes a short while before becoming active. The onboard LED will flash twice, and after this the board is ready for use. 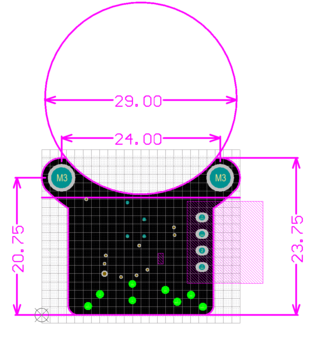