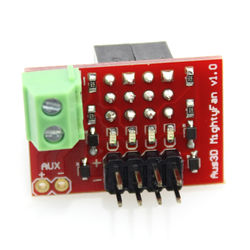 MightyFan is TinyFan's bigger brother. It does the same job - it lets you add extra controlled fans to your RAMPS printer controller, but MightyFan has four fan outputs instead of two - plus an extra auxiliary output for an always-on fan.

MightyFan has four controlled fan outputs – each with an indicator LED and flyback diode for protection when using larger fans. MightyFan can also be used to control LEDs, or even heating elements – we've used MightyFan to power a HotEnd cartridge! Check the specifications for recommended power ratings.

MightyFan plugs directly into the ‘Servos’ header on RAMPS, and any attached fans are controlled by pins D11, D6, D5 and D4. Most printer firmware supports using these pins to control fans – we've got details on modifying Marlin below.

Running a 24V printer? MightyFan can handle it, just make sure your fans can! MightyFan will run on an input from 5V-25V, and because it’s fully PWM-controllable, you can always run your attached fans at any voltage lower than the input – so you can use 12V fans with a 24V supply! Just make sure you limit the PWM value to 50% in firmware, and your fans will run happily!

Please refer to the documentation on the TinyFan page.

MightyFan wasn't designed to drive big loads - but provided you're reasonable it's surprising what it can do! We've successfully tested MightyFan powering a 12V 40W ceramic cartridge heater (the type typically used in HotEnds) without any signs of distress. If you use it for something unexpected or unusual, let us know!

MightyFan uses a MOSFET with a very low RDS(ON) value, which means it's pretty efficient at what it does - not a lot of energy is wasted as heat, which is nice. MightyFan should stay cool to warm under most loads - if it's become uncomfortable to touch, then you might be asking too much of it!

Because MightyFan is quite compact, the PCB's trace-width will likely be the limiting factor in high-current situations. Each MOSFET has a maximum rating of 8A - however the board itself likely won't tolerate this for too long. We don't recommend running multiple high-power devices off of one board - but if you absolutely have to, make sure to use outputs from different MOSFETs (i.e. outputs 1 and 3, 2 and 3, 2 and 4 - don't use 1 and 2, or 2 and 3).

Please refer to the troubleshooting tips on the TinyFan page. Note that the test sketch will only test the first two outputs - you'll need to change the numbers 6 and 11 to 4 and 5 to test the other two outputs on MightyFan.

MightyFan is open source hardware - all source files are available on GitHub under the GPL V3 License.

MightyFan is available to purchase from the Aus3D store. As MightyFan is open-source, you might find it crop up elsewhere too!